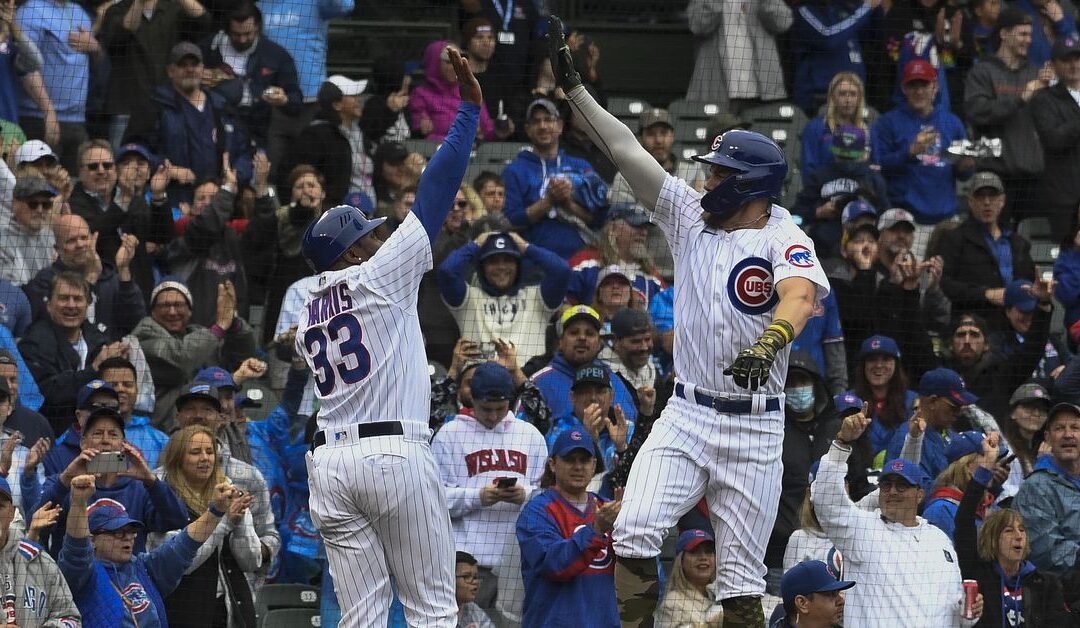 I can think of a lot more pleasant ways to spend a Saturday afternoon.

Like, having a root canal. Or knee surgery. Or sitting in traffic for six hours on the Kennedy Expressway.

All of those things would have been preferable to the Cubs’ depressing 7-6 loss to the Diamondbacks.

Honestly, I don’t even feel like doing this recap but you come here for those every day after a Cubs game and so you shall have one.

It rained. Hard. For more than three hours, from about 11:30 to 2:30. It didn’t look like it was going to stop, and then suddenly it did, and they cleared the tarp and prepared the field while it was still pouring. But by game time it had stopped. Is that good? Maybe not, as you will see.

Incidentally, I cannot remember spring weather this bad in Chicago, like, ever. Since the beginning of April there have been maybe three or four nice days, it’s been mostly cold and the rain has been relentless. I’d gladly send it all out West, where they really need it.

All right, now to the game.

The Cubs took a 2-0 lead in the second inning on back-to-back homers.

That one went a long way:

Both of those were off Madison Bumgarner, who has pitched pretty well this year. So that’s good!

So is this: Justin Steele was mowing down Diamondbacks hitters. He allowed a hit and a walk in the third, but ended that inning with two fly outs.

In the bottom of the third, Willson Contreras singled and stole second. During Seiya Suzuki’s at-bat, this happened [VIDEO].

He just left the field and headed to the clubhouse. This is what we know:

This is obviously not good. The only other catcher on the 40-man roster besides Yan Gomes is Miguel Amaya, and he’s on the minor league injured list and not available. That means we’d be looking at P.J. Higgins backing up Gomes. At least Gomes is a capable MLB catcher, unlike the collection of misfits who backed up Contreras last year. Hopefully Willson is okay. I hope the cold, damp conditions didn’t help lead to this injury.

Then Gomes drove in Suzuki to make it 4-0 [VIDEO].

It’s 4-0 Cubs and Steele is breezing. He finished five innings, allowing just the one hit and two walks, with nine strikeouts, his second straight excellent start against the D-backs. By striking out nine, he accomplished this:

Justin Steele joins Cole Hamels, Jon Lester, Tom Gorzelanny, Ted Lilly, Rich Hill, Hippo Vaughn and Rube Waddell as the only lefty pitchers to have 9+ strikeouts in at least two straight starts for the Cubs (since 1901). Vaughn is only one to have 3 such starts in a row.

Quite the collection of lefties, that.

So the Cubs got a good relief outing out of Chris Martin for an inning and a third and then the bullpen completely fell apart. Brandon Hughes got hit hard. Scott Effross, who’s been really effective all year, had a bad outing. David Robertson allowed the first five hitters he faced to reach base and that tied the game in the eighth. It might have ended there except for some fine defense. First, there was a force play at the plate with the bases loaded. Then, Andrelton Simmons speared a line drive. And then, Robertson finished off the ninth [VIDEO].

But the Cubs offense basically disappeared after the third inning. Fourteen straight Cubs went down until Ian Happ singled with one out in the eighth. Jonathan Villar also singled, but nothing came of that, and in the ninth, Christopher Morel singled with two out but was out on an ill-advised steal attempt.

The 10th inning was more of the same. Rowan WIck, who’s also been quite effective this year, allowed a couple of hits, scoring the Manfred man and another runner, and Daulton Varsho, who had doubled, scored on a Simmons throwing error for the infamous “Little League homer.” Here, watch it if you dare [VIDEO].

The Cubs did attempt to rally in the bottom of the 10th. With one out, Simmons drove in Morel, who was the Cubs’ Manfred man [VIDEO].

Simmons then stole second and was driven in by Villar [VIDEO].

The ball got stuck in the ivy; Villar rounded the bases, which is the right thing to do in that situation in case the umpire says the ball is in play, but it wasn’t.

Suzuki had a chance to be a hero, but struck out to end the game.

So add “bad bullpen work” to the three bad things in the headline and seriously, I’d have rather had that root canal. Or the traffic on the Kennedy.

The Cubs drop to 6-15 at home (and they lost their last nine home games last year, so that makes them 6-24 in their last 30 games at Wrigley), and 3-10 in one-run games. They’re 12-13 in all other games. You tell me why that is, I sure can’t. I suppose it could be random, but I’ll bet the Cubs go to Cincinnati next week and thrash the Reds.

In the meantime, there will be a chance to salvage the final game of the series Sunday afternoon at Wrigley Field, where we have been told it will not rain. Wade Miley will start for the Cubs and Merrill Kelly will go for the Diamondbacks. Game time is 1:20 p.m. CT and TV coverage will be via Marquee Sports Network.