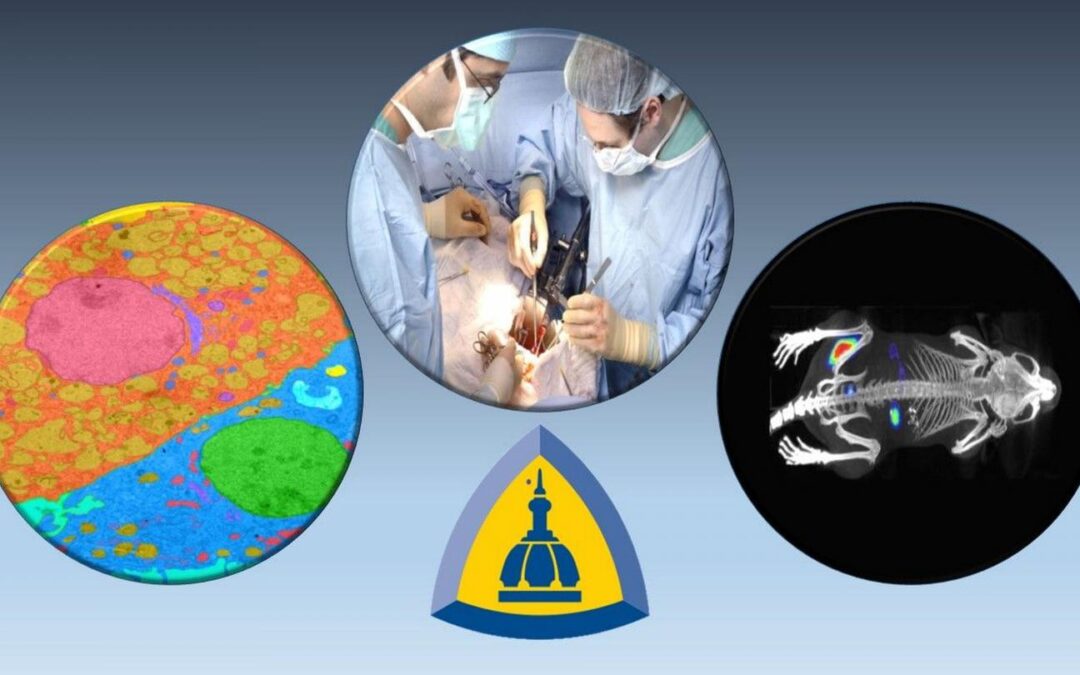 Alzheimer’s disease is one of medicine’s most elusive thieves, a disease that slowly and irreversibly robs a person’s ability to think, reason, remember and maintain normal body functioning. The underlying cause of Alzheimer’s disease is unknown, but researchers believe that one of the prime suspects is a microscopic fragment of protein known as amyloid beta (Aß). Scientific evidence suggests that tangled, sticky masses of Aß called plaques disrupt communication between brain cells and eventually, lead to their death.

A recently published study, conducted by Johns Hopkins Medicine researchers David Nauen, M.D., Ph.D., assistant professor of pathology, and Juan Troncoso, M.D., professor of pathology, may be one of the first to provide evidence that in humans, Aß proteins exit the brain via the glial-lymphatic (glymphatic) system — the vascular network that helps clear waste materials during sleep from the central nervous system.

“This observation supports the hypothesis that the glymphatic system contributes to the clearance of amyloid beta from the brain, and that failure to do so may lead to plaque formation,” Troncoso says.

The findings were first reported online May 31, 2021, in Alzheimer’s & Dementia, The Journal of the Alzheimer’s Association.

Nauen says animal studies in recent years have demonstrated the role of the glymphatic system as the brain’s “trash remover,” clearing Aß and other metabolites. However, he says, this glymphatic cleansing was difficult to verify in humans.

“In the absence of an imaging method that would enable us to see the glymphatic system in action, we decided instead to look for Aß-labelled cells in lymph nodes that had been surgically removed, as part of standard cancer treatments, from 27 patients [17 women and 10 men],” says Troncoso. “Evaluating lymph nodes taken from two different regions — the neck [cervical area] and the inguinal [groin] area — enabled us to define whether Aß was present, and if so, whether it was likely drained from the brain [which would be predominantly cervical] or from the lower extremities [which would be predominantly inguinal].”

What Nauen and Troncoso found was that the levels of Aß-containing cells were more than 40 times higher in the excised cervical lymph nodes compared with the inguinal nodes, strongly suggesting that the glymphatic system helps remove the destructive protein from the brain.

The researchers say their finding needs to be validated in an autopsy study where there is access to cognitive histories of the decedents, before-death measurements of Aß levels in the cerebrospinal fluid and plasma, data from neurological and pathological evaluations, and detailed examinations of the cervical and inguinal lymph nodes to document the presence of Aß fragments.

Nauen and Troncoso are available for interviews.

Although it was first reported in 1880, there has been little research conducted on prurigo nodularis (PN), an inflammatory chronic skin disorder characterized by firm, intensely itchy nodules that appear across the arms, legs and torso. PN disrupts the sleep and quality of life of those afflicted, and while its cause is largely unknown, it’s often linked to additional health complications such as cardiovascular disease, chronic kidney disease and type 2 diabetes. It also disproportionately affects African Americans.

Unfortunately, PN does not have any U.S. Food and Drug Administration approved therapies. However, as a result of new research from Johns Hopkins Medicine, more is now known about the underlying causes of this condition and its associated diseases — insight that could pave the way for new treatments.

In their study, first posted online March 22, 2021, in the Journal of Investigative Dermatology, the researchers looked at the relationship between skin cell messenger RNA — genetic material that directs cells to make proteins — and molecules circulating in the blood that mediate systemic inflammation, to identify potential causes of PN.

Such research is vital, says Shawn Kwatra, M.D., assistant professor of dermatology at the John Hopkins University School of Medicine, because PN is “tremendously understudied” compared with other inflammatory skin conditions, such as psoriasis, which has multiple approved therapies.

“There is an urgent need to better understand the development of this condition, which greatly impacts the lives of patients, causing unbearable itch, sleep disturbance and psychosocial distress,” he explains.

To provide new data that might enable targeted therapies, Kwatra and his colleagues focused on the connection between systemic inflammation in the blood and the skin. Specifically, they discovered that circulating blood CD4+ T lymphocytes — known as helper T cells because they enable the immune system to adapt to different conditions — and CD8+ T lymphocytes — commonly referred to as killer T cells because they seek and destroy infected or damaged cells — secrete increased levels of interleukin-22 (IL-22), a protein (known as a cytokine) that causes skin inflammation, thickening and scarring. IL-22 also has been shown to be associated with type 2 diabetes in patients.

The researchers found IL-22 secretion by a subset of CD4+ T cells known as Th22 cells resulted in a “downstream” increase of chemical signaling throughout the skin that mediated inflammation leading to PN. The research team used a technique known as gene set variation analysis to show that these Th22 cells are part of a very dysregulated immune pathway (a disruption in the normal balance of the immune system often leading to overactivation) and correlated most strongly with the itch intensity reported by patients with PN.

“This study provides direct evidence that PN is a systemic inflammatory disorder, with circulating blood inflammation serving as a link between skin disease and other comorbidities, such as insulin resistance and high blood pressure,” says Kwatra. “Identifying the links between chronic itch conditions and other underlying health issues shows us that it is important for patients with PN to get treated early so the systemic inflammation does not contribute to the development of more serious health issues.”

Kwatra is available for interviews.

According to the National Cancer Institute, colorectal cancer is the fourth most common cancer diagnosed in the United States, predicted to strike nearly 150,000 people in 2021. The agency also estimates the disease will kill approximately 53,000 Americans this year, making it the nation’s second leading cause of cancer mortality. Even more disturbing, say the experts, is the worldwide trend of increased incidence for early-onset colorectal cancer in people younger than 50.

Because catching colorectal cancer early is the key to saving lives, a Johns Hopkins Medicine team has been focusing its research on better understanding the molecular-level characteristics of the cell lining — known as the epithelium — of the colon (large intestine) in order to define how cancer may begin there.

“Our goal is to study this epithelial ‘soil’ in which cells, transformed into cancer-causing ‘weeds,’ can arise and proliferate,” says Tatianna Larman, M.D., assistant professor of pathology at the Johns Hopkins University School of Medicine. “Finding what conditions in the epithelial stem cell niche [microenvironment] promote neoplasia [abnormal cell growth] and the acquisition of cancer driver mutations [changes in genetic sequences that cause cells to become cancerous] may help us identify ways to ‘clean the garden’ before cancer can emerge.”

In a study published in the May 2021 issue of the journal Neoplasia, Larman and her colleagues used normal colon intestinal organoids — cell lines grown from intestinal stem cells that function like miniature colons — to see if changing the microenvironment alone would lead to epithelial changes that are precursors to cancer.

“We know from research studies that intestinal stem cells require certain ‘niche factors’ to maintain normal growth and function — a balance known as homeostasis– and that precursors to cancer can grow without these factors,” says Larman. “When we removed one of those niche factors, a protein known as epidermal growth factor [EGF], most organoids died as expected. However, over many months, the rare survivors surprisingly adapted to growth without EGF and exhibited many features of neoplasia, such as abnormal morphology and chromosome numbers.”

Studies have shown that inflammatory bowel disease and the resulting colitis — a form of chronic injury and inflammation in the colon — confers an increased risk for colorectal cancer. So, the researchers looked specifically at organoids derived from mice with colitis and found they could adapt to an EGF-free microenvironment more rapidly.

Since the research team showed that such EGF-independent cells exhibit many molecular characteristics of early-stage tumors, Larman says this provides evidence that chronic inflammation and molecular-level repair of the epithelium may “reprogram” the cells to lower the threshold for malignancy.

The team hopes its findings will expand the thinking about cancer initiation to encompass how “microenvironmental remodeling” may promote and synergize with early mutations that drive cells toward cancer.

“As a pathologist, I examine countless polyps [growths that are often precursors to colorectal cancer] under the microscope from patient screenings after colonoscopies,” says Larman. “Those samples made me wonder what microenvironmental molecular changes allowed the polyps to arise and grow. Our study provides one possible pathway, paving the way for future investigations into how we can return the niche and epithelium to normal, cancer-free homeostasis.”

Larman is available for interviews.

Johns Hopkins Medicine researchers have identified a protein — DMBT1S8 — as a target for potential therapies to treat inflammation in the nasal and sinus cavities.

The researchers’ findings were published March 20, 2021, in the journal Glycobiology.

Nasal and sinus inflammation — known medically as chronic rhinosinusitis — is one of the most common chronic illnesses in the United States, according to the U.S. Centers for Disease Control and Prevention. But for people with the most severe form of the condition, chronic rhinosinusitis with nasal polyps, it isn’t your average stuffy nose.

Patients with this disorder are more susceptible to developing nasal obstruction, asthma or asthma like symptoms, sleep apnea, or loss of taste and smell. Corticosteroids are sometimes prescribed to treat severe forms, but are known to have dangerous side effects if used too long.

Fifteen years ago, Jean Kim, M.D., Ph.D., associate professor of otolaryngology-head and neck surgery at the Johns Hopkins University School of Medicine, and colleagues found that a protein called DMBT1 (deleted in malignant brain tumors-1) was elevated in nasal polyp tissues. However, the significance of this finding was unclear.

A more recent study by a team led by Ronald Schnaar, Ph.D., the John Jacob Abel Professor of Pharmacology at the Johns Hopkins University School of Medicine, found that a key process controlling this type of inflammation requires a specific molecular structure known as siglec-8 (S8) in order to occur. Siglec-8, the researchers learned, binds with DMBT1 to form the isoform, or nearly identical twin, of DMBT1 called DMBT1S8.

Building on this research and searching for rhinosinusitis therapies with fewer side effects, Kim and her team conducted their latest study, an analysis of nasal secretions and biopsies from patients with chronic rhinosinusitis with nasal polyps. They wanted to understand more about the mechanism of the condition, specifically which type of sinusitis patient expresses the DMBT1S8 protein and from where in the nose it is produced.

“It was important for us to not only identify that DMBT1S8 is made in the airway, but also to understand its role in the development of nasal polyps,” Kim says.

The researchers discovered that the level of DMBT1S8 proteins was more elevated in patients with chronic rhinosinusitis with polyps than in those with the nasal inflammation but no polyps.

The researchers also found that the DMBT1S8 protein is more likely to be located in the portion of a polyp where it is made, a region known as the submucosal glands. They speculate that from there, the protein is secreted into the airway and functions to control the inflammatory response involved in nasal polyp formation.

Kim says that learning how to manipulate DMBT1S8 structure and function may enable the development of novel therapies that can boost the anti-inflammatory response against chronic rhinosinusitis with nasal polyps.

Kim is available for interviews.